Glycation, which is also called the Maillard reaction as named after the French chemist who discovered it in 1912, is a non-enzymatic reaction between reducing sugars and amino acids and/or proteins 1).

Glycation is involved in the process of coloration as well as the change of scents and flavors in heated food, and in the process of nutritional loss during the storage time. As such, it has been drawing a lot of attention from the field of food science 2). As a glycation reaction product in human blood, hemoglobin A1c (HbA1c) has been recognized as a biomarker for blood glucose control, and it has been clinically adopted in the field of diabetes treatment.

Hemoglobin is not the sole protein involved in glycation in the body. Albumin, keratin, globulin, collagen, etc. are glycated too. During the glycation process, carbonyl compounds such as 3-deoxyglucosone(GO), methylglyoxal (MGO), glyceraldehyde, glycolaldehyde and others are formed as the main intermediates, and at last AGEs (advanced glycation end products) are formed.

Hemoglobin is not the sole protein involved in glycation in the body. Albumin, keratin, globulin, collagen ,etc. are glycated too. During the glycation process, carbonyl compounds such as 3-deoxyglucosone, glyoxal (GO), methylglyoxal (MGO), glyceraldehyde, glycolaldehyde and others are formed as the main intermediates, and at last AGEs (advanced glycation end products) are formed.

Some characteristics that distinguish AGEs in its generation process are its dark brown color, fluorescence (mainly, excitation wavelength of 370 nm, emission wavelength of 440 nm) (Fig. 1), and cross-linking of proteins, but whether these properties exist or not is different among AGEs. 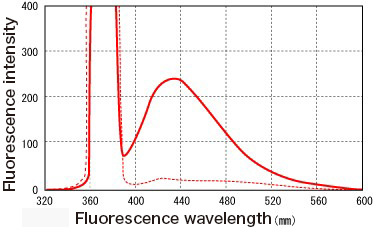 Glycative stress refers to stress to the body caused by aldehydes and reducing sugars, and the reactions that come afterwards (Fig. 2). 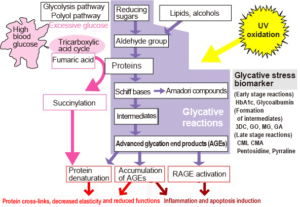 In a narrow sense, glycation refers to the reaction system where non-enzymatic reactions from proteins and reducing sugars form Schiff bases, glycated proteins, other various intermediates and lastly AGEs. These reactions are responsible for denaturating proteins in the body and decreasing their functions.

The beta oxidation and peroxidation of lipids in the body result in the forming of aldehyde groups and ketone groups. The carbonyl groups in the aldehydes and ketone molecules are polarized when oxygen atoms, which are high in electronegativity, attract electrons, and the carbon atoms will be prone to nucleophilic attacks. And if these functional groups react under no control with lysine and/or arginine (protein components), the functional properties of proteins will be compromised.

Excessive glucose in cells will hinder the reactions of the tricarboxylic acid cycle and this will increase fumaric acids 8-9). Fumaric acids react with cysteines, a type of amino acid (composition of protein), and forms S-(2-succinyl)cysteine (2SC). This reaction is named succinylation. When the functionality of proteins is reduced or lost due to succinylation, damage/issues occur to the body. The types of protein that can be succinylated in the body include cytoskeletal proteins, heat shock proteins 8), adiponectin 9), etc.

AGEs accumulated in tissues will combine with RAGE, the receptors for AGEs, and activate cell signals and cause proinflammatory cytokines to be formed 10). RAGE causes cellular responses from intracellular signal transmission and as an AGE receptor is working towards pathogenesis 11).

Apart from AGEs, ligands that are bound to RAGEs include advanced oxidation protein products (AOPP), which is an oxidative damage product and also an oxidative stress mediator, an amyloid beta , which is accumulated in the brain with Alzheimer’s disease, transthyretin, which is accumulated trough familial amyloidotic polyneuropathy, high mobility group B-1 (HMGB-1)/amphoterin, which is pointed out as being associated with cancer metastasis and inflammation, S100 proteins, which act as inflammatory mediator, and Mac1 on the surface of WBCs. Of AGEs, CML, glyceraldehyde and glycolaldehyde modified compounds have high RAGE bonding properties 12).

Glycative stress is responsible for denaturation and functional damage of proteins (post-translational modification), accumulation of waste products, prevention of the tricarboxylic acid cycle, activation of intracellular signals, causing tissue damages, and accelerating the degeneration related to aging. Ultraviolet light and oxidative stress are designated as factors that drive glycative stress.

Glycative stress in the context of anti-aging medicine

As humans mainly derive energy from carbohydrates in food, during their lifetime they cannot avoid glycation which occurs between the blood glucose and protein 13). Evidence of it includes that the accumulation of AGEs in the skin collagen of healthy people increases as they get old, that diabetes patients have more AGEs than healthy people do at the same age 14), and that the skin of diabetes patients is less elastic compared to that of non-diabetic people 15).

Formation and accumulation of AGEs through glycation is a cause for not just diabetes complications, but also the progression of skin aging 16), Alzheimer’s disease 17), high blood pressure 18), arteriosclerosis 19), osteoporosis 20), etc. AGEs formed in the collagen tissues of the skin, bones and cartilages are a focus of interest from the skin care and health fields as their worsening conditions include browning of tissues and reduced skin elasticity.

Anti-aging medicine is a part of preventive medicine. It is a field of study that aims to improve the quality of life and the ability to live a long and healthy life 21). The aging process takes place differently depending on the individual. Some people experience the aging process in their vascular system (arteriosclerosis), while others experience it in their nervous systems (dementia, Alzheimer’s disease), and others experience it in their bones (osteoporosis). The aging process does not affect everyone equally and every person has different risk factors when aging.

This is why anti-aging medical check-ups evaluate your level of aging (functional age) by evaluating the age of their muscles, blood vessels (vascular), nervous system, hormones and bones 22). Furthermore, the factors contributing to reduced functionality are defined as aging risk factors and are evaluated as either “stress on the immune system”, “oxidative stress”, “physical and mental stress”, “glycative stress” and “lifestyle choices”. (Fig. 3) 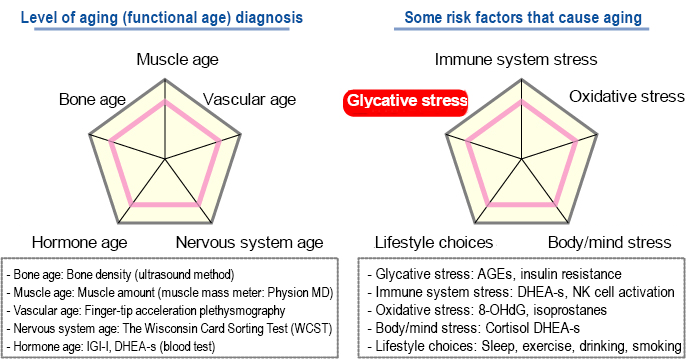 When reading the evaluation results from the anti-aging medical checkup, your focus should be placed on the items with the highest “level of aging” and on the most prominent risk factors, so that they can be corrected and a well-balanced level of aging can be achieved in the body.

In anti-aging medicine, glycative stress is explained as an aging risk factor that causes stress to the body from aldehydes and reducing sugars, and the reactions that come afterwards.