Measures against glycative stress (3) Degradation and excretion of AGEs

Excretion of AGEs by the kidneys

AGEs released in the blood due to protein metabolism and AGEs absorbed from the digestive tract following the digestion of food are excreted into the urine via the kidneys. The proximal tubule of the kidney has a membrane receptor called megalin, which reabsorbs low-molecular-weight proteins that are filtered from urine. After AGEs in the blood bind to the megalin in the kidneys, they are taken into the renal tubular cells by endocytosis, an action where cells take in extracellular substances (Fig. 1) 1). However, when large amounts of AGEs are taken in by megalin, the degradation of AGEs in lysosome, which is one of the intracellular organelles, is saturated, resulting in the accumulation of AGEs in the renal tubular cells 2-3).This leads to reduced renal functions and an increase in the accumulation of in vivo AGEs. 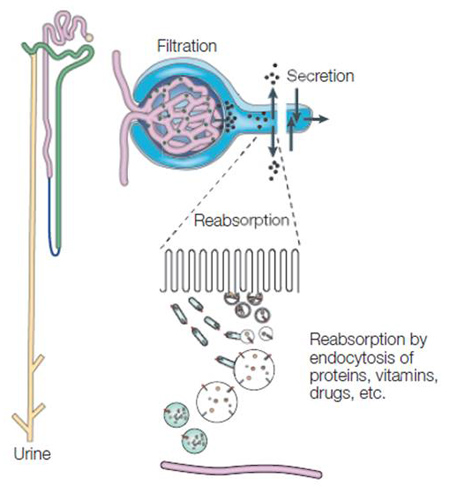 Fig. 1 Protein metabolism and excretion in the kidney (Adapted from Christensen et al .1))

Modification and metabolism of protein due to glycative/oxidative stress

Protein alteration plays a key role in the decline of functions in the nervous, immune and endocrine systems, as well as various cell and tissue functions associated with aging. Glycative stress and oxidative stress promote in vitro chemical modification of proteins, which then causes an abnormality. These proteins, which are called altered proteins, not only have reduced in vivo functions but also affect the cells and tissues 4). β-Amyloid, which accumulates in the brains of patients with Alzheimer’s disease, is a type of altered protein that damages nerve cells and impairs neural functions such as memory and learning functions. Also, crystalline in the lens of the eye is denatured along with aging, and its aggregation (protein alteration) causes turbid to become a cause of cataracts. Furthermore, many neurodegenerative diseases such as Parkinson’s disease are caused by the accumulation of altered proteins that have changed structures 5). 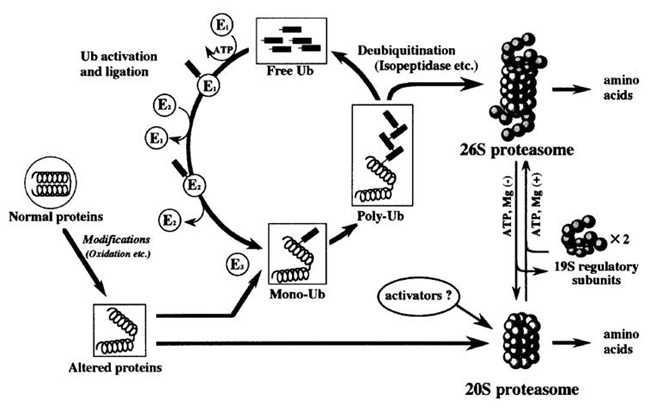 The body always removes altered proteins that are produced inside the cells by repeating synthesis and degradation of proteins and reuses the amino acids produced by the degradation to maintain its functions. However, the protein synthesis ability of cells decreases with aging, and metabolic turnover slows down in older animals. Furthermore, degradation of cellular protein becomes difficult due to the formation of AGEs which comes with aging, resulting in an increased amount of in vitro altered proteins.

Substances with degradation effects on AGE-crosslinks

N-phenacylthiazolium bromide (PTB) is known as a substance with degradation action on AGE-derived crosslinks of proteins 7). PTB recognizes the α-diketone structure of Amadori-protein-ene-dion-derived protein, which is formed by glycative stress, and degrades the C-C bonds and protein-protein crosslinks (Fig. 3) 7). It is suggested that this action may contribute to the inhibition of AGE accumulation in blood vessels and the treatment of vascular complications that come from diabetes. A study where 10 mg/kg of PTB was orally administered to diabetic rats for 4 weeks indicated that it inhibits the formation of collagen AGE-derived crosslinks 7) and acted to degrade AGEs in the blood vessels 8). Furthermore, inhibition actions on vascular stiffening and accumulation of AGEs were observed in a conducted study where 3-phenacyl-4,5-dimethylthiazorium chloride (ALT-711) with increased PTB water solubility was administered to diabetic rats 9). A human clinical study conducted on the oral ingestion of ALT-711 for 8 weeks at amounts of 210 mg/day or 420 mg/day, demonstrated an improvement in vascular stiffening and uncontrolled systolic blood pressure 10-11). PTB is referred to as an “AGE breaker” because of these results. 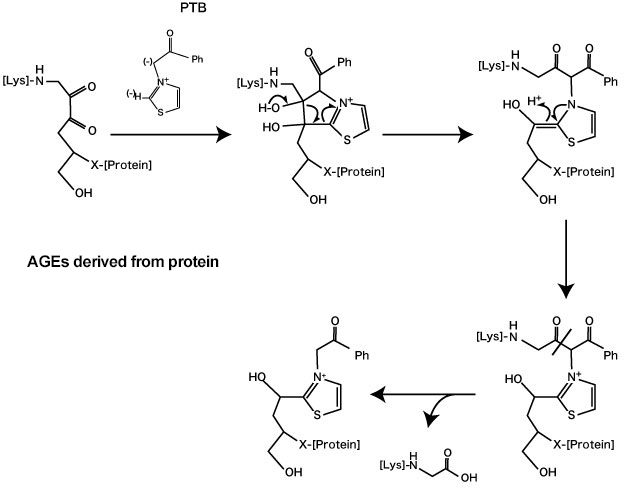 On the other hand, another study reported that PTB did not affect the degradation of AGE-derived crosslinks in the skin and tail collagen of diabetic rats 12). For this reason, there is some skepticism about the effects of PTB.

YAC extract, which is ethanol extract from Japanese mugwort (yomogi), degraded AGE-crosslinks generated in the collagen gel-glucose reaction model.  Furthermore, a study conducted on the usage (6 months) of skin lotion, milky lotion and cream containing the YAC extract, showed improvement in the elasticity and yellowness (b*) of skin 13).

Terpinen-4-ol, a kind of monoterpene alcohol contained in yuzu (Citrus junos) has been shown to affect degradation action on AGE-derived crosslinks through the hydrolysis of acid anhydride via the production of carboxylate ester by the reaction type of Bayer-Villiger oxidation after nucleophilic substitution by hydroperoxide 14).

It is presumed that the trihydroxybenzene structure of ellagitannins is involved in the degradation action of pomegranate extract and pomegranate-derived ingredients on AGE-derived crosslinks 15).

The degradation action on AGE-derived crosslinks by these natural products may contribute to the degradation and excretion of in vivo AGEs that have already accumulated.

Oxidized protein hydrolase (OPH) is a kind of serine protease that is widely present in living tissues such as porcine liver, human blood and rat brain 16-17). It has also been reported that OPH is present in the stratum corneum of human skin 18-19). It is also known as an acylamino-acid releasing enzyme (AARE) since it is an enzyme that releases N-terminal acylated amino acids into proteins. OPH acts on the degradation of N-terminal amino acids in formylated, acetylated, butylated and propylated proteins in addition to acylated proteins 20) as well as aging proteins that have been modified by oxidation and glycation 21). Furthermore, OPH and proteasome act together on the degradation of aging proteins 22). When it comes to diabetic rats, serum OPH activity significantly increases and the amount of carbonyl-modified protein in the blood decreases 23). 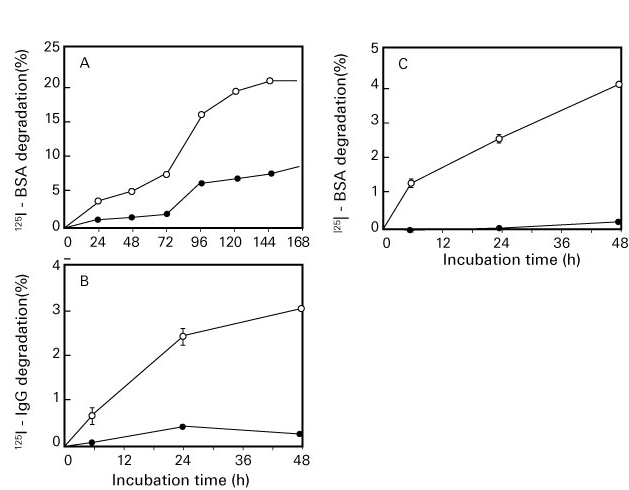 Natural products that are known to affect OPH activity are plant extracts such as tea, herbs and vegetables. There are some herbs and herbal teas that promote OPH activity. On the other hand, teas derived from tea trees (Camellia sinensis) and catechins inhibit OPH activity 24-26). OPH has a degradation action on glycated proteins and AGEs, which are widely present in living tissues. This means that the activation of OPH activity by natural products may contribute to the promotion of degradation and excretion of in vivo AGEs.