As the outermost part of the body, the skin protects internal parts of the body from external environment elements including impact, temperature, ultraviolet rays, and chemicals. The skin is composed of three layers: epidermis, dermis and subcutaneous adipose tissue (this list starts from the outermost layer).1)

The epidermis is the outermost skin layer with an average thickness of 0.2 mm. This layer can be further subdivided into 4 layers: stratum corneum, granular cell layer, prickle cell layer and basal cell layer (this list starts from the outermost layer) (Figure 1). The stratum corneum, the outermost layer, is water-repellent and protects the muscles, nerves, blood vessels and other organs inside the body against external injuries, and at the same time prevents bacteria, virus, etc. from entering the body. Thus, the stratum corneum plays a crucial role in maintaining the body. As much as 95% of the cells that constitute the epidermis are keratinocytes, which divide themselves at the lowermost layer of the epidermis and then migrate to the outer layers as they mature. The basal cells divide themselves, generate daughter cells and are eventually shed off from the epidermis (desquamation) over the course of 40 to 56 days, and this period is called the “turnover time”.2-3) 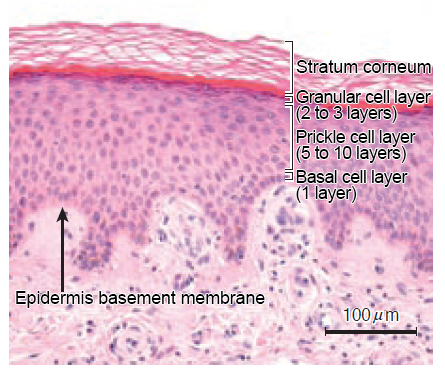 The stratum corneum is a membrane tissue composed of about 10 layers of cells with no nuclei, and through exfoliation, they are shed off from the epidermis as dead skin cells one after another. The stratum corneum consists of keratin, lipids and other various constituents that the keratinocytes produce. Keratinocytes divide at the basal cell layer, differentiate and mature while producing keratin, and migrate to the upper layers. The basal cells produce keratin 5 and keratin 14, while the prickle cell layer and granular cell layer produce keratin 1 and keratin 10.

Inside the epidermis are melanocytes, which produce skin-darkening pigments, Langerhans cells, which are involved in skin immunity functions, and Merkel cells, which are tactile receptor cells.

The dermis is a layer tissue with a thickness of 2.0 to 3.0 mm and is separated from the epidermis by the basement membrane. Anatomically, the layer consists of 3 layers: papillary layer, subpapillary layer, and reticular layer. The dermis is the source of skin’s elasticity and firmness.
The dermis consists of the stromal component (extracellular matrix), which constitutes the fibrous tissue, cells that produce the stromal component (extracellular matrix), etc. The main constituents of the stromal component are collagen fibers (mainly, type I and type III collagens), elastic fibers (elastin fibers), proteoglycans (hyaluronic acid, chondroitin sulfate, etc.), etc.

Collagen represents 70% of the dry skin weight of the dermis and provides the skin with firmness. Elastin, which accounts for 1 to 2 % of the dry skin weight, is cross-linked and provides the skin with elasticity. Proteoglycans form heavily-hydrated gels and provide the skin with hydration. In addition to the above, the dermis has nerve endings for feeling the touch, comfortability and temperature, and secretory glands for adjusting the temperature of the body and for hydrating the skin to keep it flexible (sweat glands, sebaceous glands), hair follicles, blood vessels, etc.

The subcutaneous tissue is a fat layer under the dermis and has a thickness of several millimeters, although the thickness is different depending on the part of the body. The function of the tissue is to protect the body from external heat, the cold and from impact, where the tissue acts as a cushioning agent. Additionally, the adipocytes in the subcutaneous tissue store fat and act as an energy storage site.

Aging of the skin

Glycation and aging of the skin

Collagen and elastin, which are the main components of the dermis, have a long half-life period and that makes them subject to the influences of glycation.9-10) Normally, collagen and elastin form cross-linking fibers in the tissue during the process of forming fibers, via lysine and hydroxylysine residues. However, the progression of glycation in the skin tissue induces the formation of CML in the lysine residues of proteins, and cross-linking via lysine is inhibited. Thus glycation greatly affects the stability of the skin fiber tissue. Solar elastosis refers to the state where the dermis is exposed to sunlight and aberrant elastin fibers have accumulated. This is believed to occur due to the glycation of facial elastin after being exposed to ultraviolet rays for a long period of time. Symptoms of solar elastosis occur in varying degrees to all healthy people aged 30-40 or older, and it is involved in the formation of wrinkles and sagging skin on the face. In an examination of healthy subjects, their facial skin was stained with anti-CML antibodies. It was shown that the accumulation of CML in elastic fibers begins in people in their 30s and 40s. Then, the accumulation of CML expands to all elastin fibers once they are in the elderly age range (Figure 2).11) CML-modified elastin is not easily degraded by neutrophil elastase, and causes an increase in the aggregation level and the fiber’s diameter, as well as a decrease in the elasticity and the elongation rate. Thus, the glycation of elastin is a cause of skin aging. 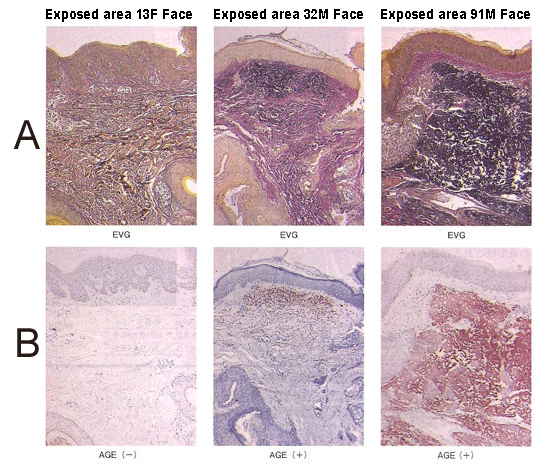 Figure 2 CML accumulation in the skin due to aging and exposure to the sun
A: Elastica van Gieson (EVG) staining,
B: Anti-CML antibody staining
The areas stained in black in the images in A indicate elastin (elastic fibers).
The darker stained areas in the images in B indicate the accumulated CML.
Adapted from Shingo Tajima (2013)11)

On the other hand, the skin shows an accumulation of AGEs in the epidermis, which has a rather short turnover period. CML accumulates in keratin 10 within the epidermis (Figure 3).12) 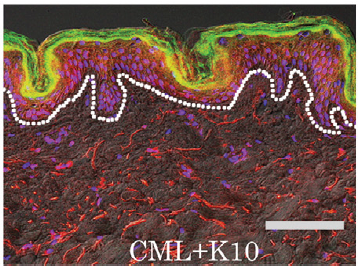 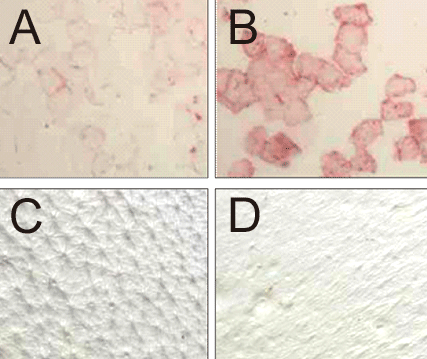