A large amount of reducing sugar, carbonyl compounds, amino acid and proteins are contained in food, and glycation reaction advances during the cooking, processing and storing of food. These are commonly known as food browning reactions. Regarding food browning reactions, reaction mechanisms have been clarified using many model reaction systems and various types of food, and substances for browning have been separated and identified1). Food glycation begins with the non-enzymatic reaction of reducing sugars that were produced via the decomposition of fructose and sugars included in carbohydrates that were used as raw materials or seasonings with amino acids and proteins to produce N-glucoside (Fig. 1). Then, N-fructoside is produced via Amadori rearrangement and carbonyl compounds such as osone and furfural are produced via dehydration and deamination reactions. The produced carbonyl compounds become glycation reaction intermediates and react with amino compounds again to produce melanoidins, high-molecular browning substances, via condensation and polymerization. Melanoidins are not single compound but a substance whose structures and degree of polymerization differ depending on the original amino compounds and the reaction conditions. This makes getting accurate measurements difficult2). 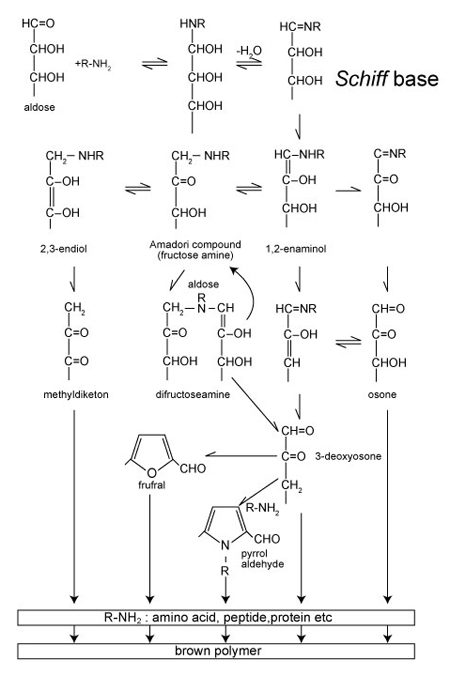 A large amount of glycated substances, glycation reaction intermediates and AGEs are contained in food (Table 1)3). CML is produced in food when it is being heated during the cooking process (Table 2)3-4). This means that we are taking AGEs when ingesting foods on a daily basis. Food contains not only AGEs that are harmless to living body, but also compounds that may affect the production of active oxygen and the progression of chronic diseases such as diabetic complications. Ingesting food that contain AGEs affects the onset of diseases such as heart diseases, Alzheimer’s disease and diabetic complications, which are strongly related to aging. Additionally, experiments on animals showed that limiting ingestion of AGEs through dietary restrictions is related to increased longevity5). We know that when ingredients are heated during cooking, mutagenicity such as heterocyclic amine and acrylamide, which are analogues of AGEs, as well as compounds with carcinogenicity are produced. 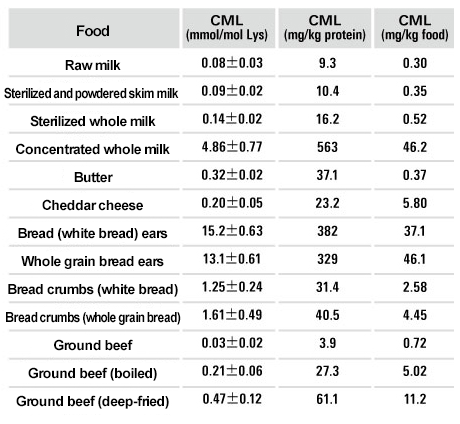 Since carbonyl compounds and AGEs that are contained in food are assumed to be associated with each disease, they are called glycotoxin.

Absorption and excretion of AGEs contained in food

There are some reports on the relationship between the ingestion and excretion of AGEs in food. When seven healthy men and women limited their intake of foods that contain a large amount of AGEs such as roasted foods, breads, beer and coffee for three days, pyrraline levels in urine decreased during the restriction period compared to the unrestricted period. Given the above, the amount of AGEs excreted into urine is reflected in the menu of a meal, which suggests that there is a relationship between AGEs contained in food and uremia6).

With patients with end-stage renal disease (ESRD), the correlation between ingested AGEs levels and serum CML levels as well as serum CML or methylglyoxal levels and blood urea nitrogen (BUN) were shown. Therefore, controlling AGEs during meals is deemed to be a significant factor in managing symptoms7).

After a high AGEs meal (1617 units AGE/mg) of cooked egg whites (protein amount: 55.5 g) with fructose (100 g) added to it (heated at 90°C for 1 to 3 hours) or a low AGEs meal (7.0 units AGE/mg) of only egg whites were ingested by 38 diabetics and 5 healthy people, the AGEs levels in their blood and urine were measured 48 hours later. The results showed that 30% of AGEs were moved into the blood of diabetic patients with nephropathy and 10% with healthy individuals8). With healthy individuals, among the AGEs that were moved into blood, a third (3%) was excreted into urine within 48 hours, and two thirds (7%) remained in their body (Fig. 2). 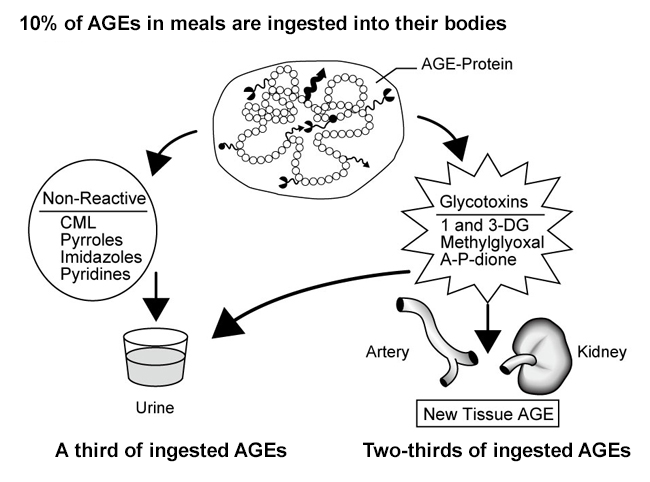 Restrictions of AGEs contained in food

As a result of the survey that measures CML amounts in each type of food, fat and meat indicated higher values than carbohydrates9). As for the cooking methods, it was found that boiling ingredients is less likely to produce AGEs compared to frying or roasting the same ingredients. When roasting meat, soaking it in lemon juice or vinegar for an hour beforehand can halve the amount of produced AGEs (Fig.3)10). In addition, when chicken dumplings are cooked in broth using bonito flakes, kelp, dried sardines, etc., compared to when the dumplings are boiled in hot water, the production of CML in chicken is strongly restricted. This is the order of how strongly restricted it is: broth from dried bonito flakes > fermented dried bonito flakes > dried sardines > kelp > dried shiitake mushrooms11). 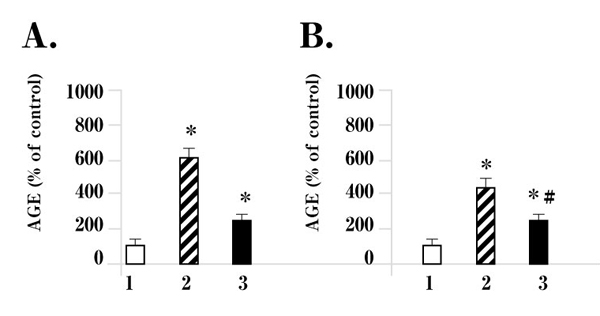 Kremezin is known as a medical drug that controls the absorption of dietary AGEs into the body. Kremezin is a spherical carbonaceous adsorbent obtained by oxidizing and reducing spherical fine-grained porous carbon derived from petroleum hydrocarbons at a high temperature. It is an oral drug used for chronic renal failure to improve symptoms and to delay the introduction of dialysis by adsorbing uremic toxins in the digestive tract and excreting them with stool. In the experiment where 6 g/day of Kremezin is administered to patients with diabetic nephropathy for three months, a decrease in CML levels in the blood has been observed12). Furthermore, since lactoferrin, an iron-binding protein, includes AGEs-binding properties, AGEs in the digestive tract may be captured and excreted by ingesting it during meals13).

As explained above, in the case of healthy individuals, about 7% of the AGEs contained in ingested foods may remain in place in their body. In addition, diabetics whose renal functions are impaired also experience impairment in their AGEs excretion function (into urine), so they need to be careful when ingesting food with a high level of AGEs. On the other hand, heating or processing foods can improve their taste by adding flavor and/or colors as well as storability. The amount of AGEs produced in food can also be reduced by choosing ingredients and cooking methods. The selected ingredients may be able to absorb and excrete AGEs. Therefore, the countermeasures against the effects of AGEs in food need to be considered based on the overall eating habits of the person in question.