The cells in vivo absorb glucose from blood and use it to synthesize ATP (adenosine triphosphate), an energy source. The brain largely depends on glucose when synthesizing ATP, which is why it is significantly affected by a drop in blood glucose levels. Therefore, in order to avoid a decrease in blood glucose levels and instead increase the level, there are various types of hormones such as glucagon, growth hormone, epinephrine or adrenaline, and corticosteroid in human body. These hormones help glucose enter skeletal muscles and adipocytes via glucose transporter, and control glycometabolism in cells in order to regulate the blood glucose levels. On the other hand, the only hormone that lowers the blood glucose level is insulin. This imbalance is thought to be a way to help humans survive hunger (Fig. 1) 1). 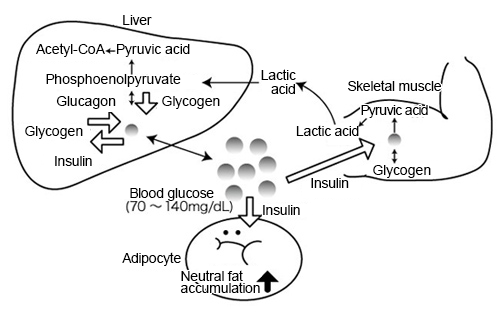 When the hypothalamus detects a decrease in the blood glucose level, the sympathetic nerve stimulates α-cells (alpha cells) in the pancreas and glucagon is secreted. In the liver, glucagon is activated by phosphorylating glycogen phosphorylase, and the accumulated glycogen is decomposed and becomes glucose, which is to be secreted into the blood, causing the rise of blood glucose levels.

Changes in blood glucose levels due to meals are controlled mainly by the mechanisms of the above hormonal effects so that the level becomes about 100 mg/dL between meals.

Two types of hormones, gastric inhibitory polypeptide (GIP) and glucagon-like peptide-1 (GLP-1) are secreted from the small intestine due to dietary ingestion stimulus in vivo. These gastrointestinal hormones are called incretins. Furthermore, when the foods are continuously ingested, the increased incretin activates pancreatic β-cells, which increases the level of insulin secretion and limits postprandial blood glucose elevation. Incretin is a gastrointestinal factor that prompts additional insulin secretion. It prompts insulin secretion and contributes to the homeostasis of postprandial blood glucose levels.

K cells that secrete GIP are localized in the upper part of the small intestine, mainly in the duodenum and jejunum. Meanwhile, L cells that secrete GLP-1 are thought to be present in the lower part of the small intestine (Fig. 2)3). K cells and L cells sense nutrients that reach the intestinal tract and secrete GIP and GLP-1 on the cell basement membrane side, respectively. The rise of GLP-1 concentration in blood is observed immediately after dietary intake and lasts for 1 to 2 hours. Similarly, GIP increases immediately after dietary intake, and the increase in blood level continues for several hours. Carbohydrates are counted as a nutrient that promotes the secretion of incretins. When it comes to incretin secretion by carbohydrates, it is assumed that carbohydrates that were absorbed via sodium-glucose cotransporter 1 (SGLT1) cause the depolarization of cell membranes and facilitate the secretion of GLP-1 and GIP. In addition to carbohydrates, proteins and lipids are believed to promote the secretion of incretins. 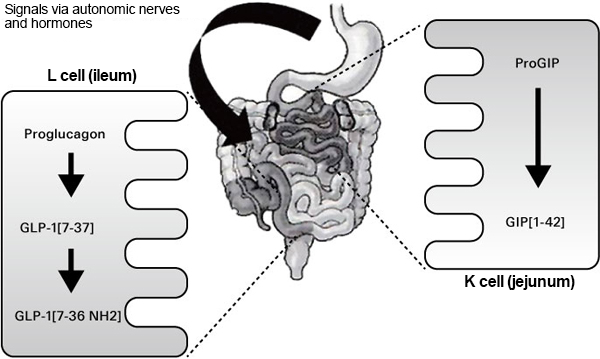 Glucose in blood is absorbed into cells via GLUT4. With healthy people, as the blood glucose level rises after meal ingestion, the pancreas secretes a corresponding amount of insulin. Then, insulin binds to the insulin receptor on a cell surface and the receptor issues signals to absorb glucose into the cells. Via this signal transduction, GLUT4 which is inside the cells, comes out onto the surface of the cells and absorbs the glucose in the blood into the cells. However, when insulin works poorly due to aging or diabetes, the signal via the insulin receptor is not transmitted well and GLUT4 does not come out onto the cell surface. If that is the case, the function to absorb glucose in blood into the cells decreases (insulin resistance). The amount of GLUT4 that appears on the surface of the cells is also increased by stimulating muscle contraction when exercising. In addition, since the amount of GLUT4 that appears on the surface of the cells increases with continued exercise, the amount of glucose to be absorbed into cells increases. As a result, homeostasis of the blood glucose level is maintained4).

Chronic effects include increasing insulin sensitivity. It has been suggested that this mechanism increases the amount of GLUT 4 protein, increases blood flow to motor muscles, decreases body fat, and increases insulin signaling protein7). Therefore, exercise restrains the elevation of blood glucose levels and is a factor for improving insulin resistance.

As for what types of exercise are considered effective, aerobic exercises such as walking, jogging and swimming, as well as muscle training, stretching, etc. are considered to be effective.

α-glucosidase inhibitor (GI) is a drug that limits glucose absorption from the upper part of the small intestine by inhibiting the actions of enzymes that decompose ingested carbohydrates into monosaccharides, which then restrains the rise in postprandial blood glucose levels. In Japan, three drugs are clinically used: acarbose (drug name: Glucobay), voglibose (drug name: Basen) and miglitol (drug name: Seibule). Acarbose and voglibose are poorly absorbed from the intestinal tract. However, a part of miglitol is absorbed in the small intestine and excreted from the kidneys in urine without being denatured. Acarbose inhibits not only the effects of α-glucosidase but also the effects of α-amylase (Fig. 3)2).

Incretin is a hormone that is secreted by gastrointestinal secretory cells after meal ingestion and it enhances insulin secretion. However, among incretins, GLP-1 is rapidly decomposed and inactivated by dipeptidyl Peptidase-4 (DPP-4), whose presence can be observed throughout the body, and its half-life in blood is as short as 1 to 2 minutes. For this reason, incretin-related drugs have been drawing attention as new anti-diabetic drugs in recent years. In Japan, some medicinal drugs have been approved, such as liraglutide (drug name: Victoza) and exenatide (drug name: Byetta, Bydureon) as a DPP-4 resistant GLP-1 receptor drug, and sitagliptin (drug name: Januvia, Glactiv), vildagliptin (drug name: Equa) and alogliptin (drug name: Nesina) as a DPP-4 inhibitor3). 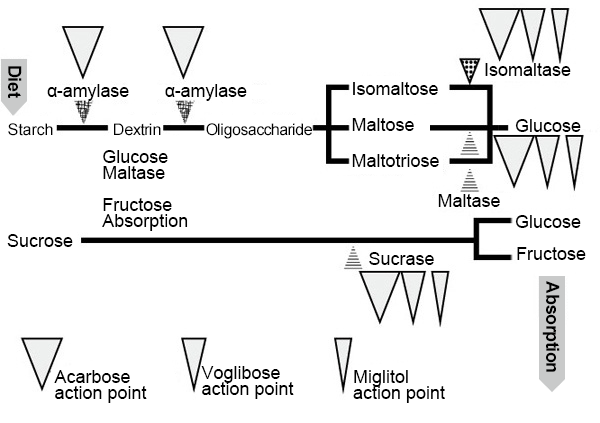 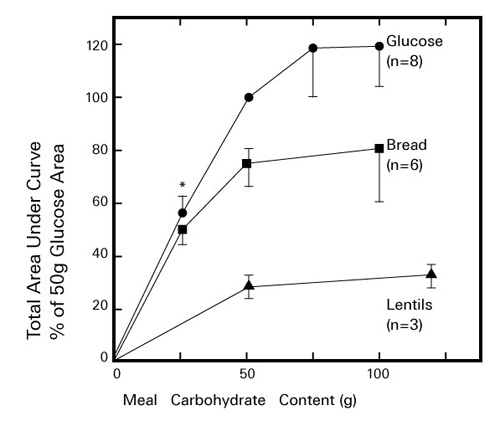 Generally, GI values that are 70 or higher indicate the high GI foods, 56 to 69 indicate the middle GI foods and 55 or lower indicate the low GI foods. When ingesting low GI food, AUC becomes smaller compared to when ingesting high GI food. So, having low GI food may moderate the rise in postprandial blood glucose levels. The GI values vary depending on the amount of carbohydrates, the degree of purification, the amount of dietary fiber, the amount of lipids, the amount of protein, the degree of processing, etc. in foods. Additionally, it is an index that expresses the degree of increase in blood glucose levels as a relative value when 50 g of carbohydrates are ingested, with the value of the same amount of glucose set to 100 as a standard diet. However, it should be noted that the information shown as the GI values may be obtained from different types of food (rice, bread, etc.) and differing amounts of carbohydrates that are used as the standard diet. In Japan, the Japanese Association for the Study of Glycemic Index (JASGI) recommends the implementation of a protocol (unified method) which indicates 147 g of packaged rice (equivalent to 50 g of carbohydrates) as a standard diet10).

On the other hand, the level of the rise in postprandial blood glucose levels changes depending on the order of food ingestion during a meal. It has been reported that when eating both 200 g of rice and 60 g of vegetables (salad), the increase in blood glucose levels and insulin secretion are moderated when eating vegetables before rice12). In response to the announcement of the results, health methods based on the eating order are gaining attention13). Additionally, it has been reported that postprandial hyperglycemia can be restrained by ingesting side dishes such as vegetables and/or hot spring (soft-boiled) eggs with udon noodles or rice (placed on top of udon noodles/rice) regardless of the eating order (Fig. 5)14). 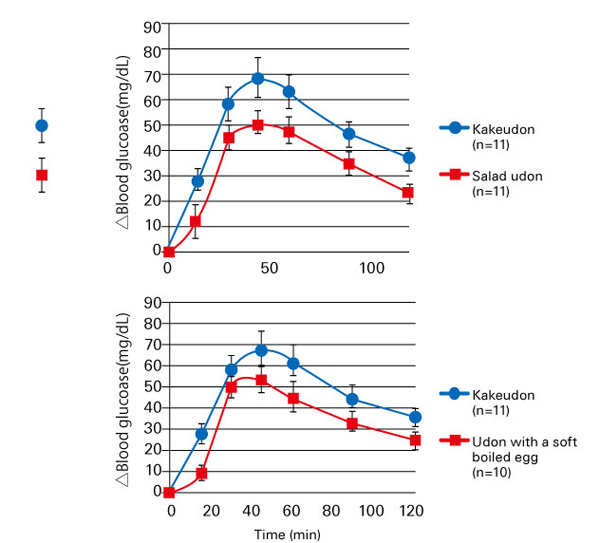 In recent years, low carb diets that reduce the dietary intake of carbohydrates themselves, which affect the rise in blood glucose levels, has become a hot topic. You should note that carbohydrates are an important nutrient and survey results show that extreme carbohydrate restrictions may increase the risk of death15).