When it comes to glycative stress evaluations, various substances that are generated in the process of non-enzymatic reactions of glucose and proteins in the body, can be a biomarker. Here we would like to explain about the AGEs measurement method and the non-invasive measurement method for AGEs in the body.

AGEs that are produced in blood via the late stage reactions include various substances such as Nε-carboxymethyl lysine (CML)1), pentosidine2) and Nω-carboxymethylarginine (CMA)3).

CML is a non-fluorescent/non-cross-linkable AGE, which is produced from lysine via GO (glyoxal) as the intermediate and is produced when diabetes and oxidative stress advance as well. Adding collagen that became CML to the medium in human dermal (skin) fibroblasts induces apotosis 4). It also exists on the epidermal layer whose metabolic turnover is relatively fast 5). CML accumulation in the stratum corneum has led to skin texture loss 6).

Pentosidine is a fluorescent/cross-linkable AGE, which is efficiently produced from ribose, arginine and lysine, and is covered by insurance as one of the early clinical biomarkers for nephropathy. In recent years, Pentosidine in blood and urine is gathering attention as a biomarker that reflects the aging of bone quality and is expected to be used for diagnosing osteoporosis 7). Furthermore, collagen in dermis also includes pentosidine whose amount increases with aging. When comparing diabetics to healthy people who are the same age, the amount of pentosidine accumulated in the dermis tends to be larger for diabetics 8).

CMA is one of the AGEs, which is produced from arginine via GO as the intermediate, and specifically remains in place in collagen 3).

For measuring CML in blood and pentosidine 9-10), ELISA kits which are sold by many companies are available for use. However, in order to measure AGEs in biological samples, treatment that matches the characteristics of the glycative reaction product to be measured is required. If a blood sample is heat-treated at a high temperature during CML or pentosidine measurement, AGEs are artificially generated during sample pretreatment, which may cause an error due to higher measurement values 11).

The HPLC method can be used as a countermeasure to avoid the deviation towards higher values at the time of pentosidine measurement. In the HPLC method, a serum sample is hydrolyzed with hydrochloric acid and contaminants in the sample are removed via pretreatment using an ion-exchange column, etc. Then, pentosidine is separated and analyzed via reversed-phase HPLC (Fig. 1)12). To detect pentosidine, pentosidine’s specific fluorescence (excitation wavelength: 335 nm, fluorescence wavelength: 385 nm) is used. However, the HPLC method has some issues such as a decrease in recovery rate during pretreatment, avoidance of contamination of measurement peaks with contaminants, and difficulty measuring multiple samples.

The AGE Reader is a clinical testing device that was researched and developed for the purpose of evaluating the risk of developing diabetes complications by non-invasively measuring the amount of AGEs that the skin accumulates 15-17). This device measures AGEs by taking advantage of the characteristic that the fluorescent AGEs that have accumulated in the tissues are excited to emit a unique autofluorescence when irradiating the skin with ultraviolet rays (Fig. 2).

In the AGE Reader measurement system, the light source (UV-A black-light) installed in the box-shaped main body (280 mm (length) × 150 mm (width) × 115 mm (height)) emits a 345 to 410 nm (maximum wavelength: 365 nm) wavelength of light that irradiates the skin surface through a glass window (approximately 2 × 2 cm) as excitation light. This device analyzes the obtained information using the dedicated software by introducing 420 to 600 nm of fluorescence emitted from skin through the excitation light into the spectroscope via the glass fiber, and then AF is calculated 18). The measurement time is about 90 seconds (in 3-measurement mode). The AGE Reader also measures the skin reflected light (reflection; Ref) via the white LED light at the same time as the fluorescence. If the Ref is less than 12%, the measured value is corrected. However, measurement cannot be performed when Ref is less than 6%. Therefore, subjects with darker skin (Fitzpatrick class 5-6 skin color) cannot be measured. Also, since the measurement values are affected by the use of skin care cosmetics including sunscreen, it is necessary to thoroughly wash the measurement position beforehand.

Skin AF is calculated from the ratio of fluorescence (420 to 600 nm) intensity to excitation light (300 to 420 nm) and is displayed in arbitrary units (AU). The AF calculated by the AGE Reader is output along with the comparison graph of data accumulated by the manufacturer. (subject’s sex, age, etc.) However, the AF analysis formula has not been disclosed by the manufacturer.

The AF values measured via the AGE Reader have shown the relationships between aging in diabetics and healthy people with fair skin (Fitzpatrick class 1-3 skin color). It shows that the values deviate upwards due to aging and diabetes. 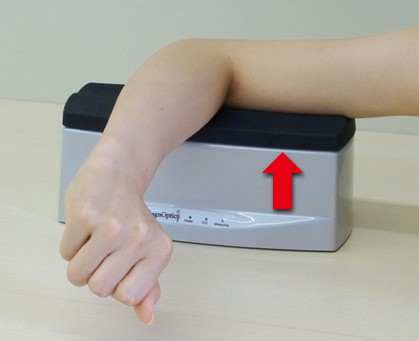 Fig. 3 Measurement of the inner part of the upper arm via AGE Reader ®
The red arrow indicates the measurement position.

As a method for non-invasively evaluating the stratum corneum functions, there is the tape-stripping method in which stratum corneum cells are collected using an adhesive tape. In the tape-stripping method, some morphological evaluation methods have been reported pertaining to the number of exfoliated keratinocytes, keratinocyte area, cell morphology and nuclear residual rate.

Biochemical measurements of proteins, keratin 22), cathepsin 23), transglutaminase 24), arginase 25), etc. have been reported as well, based on the stratum corneum that was collected via the tape-stripping method. 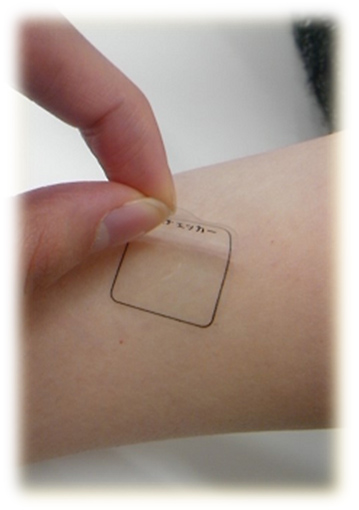