In Japan, the number of elderly people with dementia was estimated to be 4.62 million in 2012 1). The number has been increasing since then and it is projected to reach 6.75 million (prevalence of 18.5%) in 2025 and 7.97 million (prevalence of 21.1%) in 2050. This means that by 2025, about 1 in 5 elderly people over the age of 65 will have dementia, which is a disease that can affect anyone. (This is based on the assumption that the prevalence of dementia in each age group will remain constant after 2012.)

Dementia indicates a condition in which the persistence of the cognitive function that had once reached normal levels has declined due to acquired brain damage and thus disrupts a person’s daily life and social life, and refers to the symptoms that are observed when impaired consciousness is not present 2). According to the 10th edition of the International Classification of Diseases (ICD-10) by the World Health Organization (WHO), it is “a syndrome due to disease of the brain, usually of a chronic or progressive nature, in which there is disturbance of multiple higher cortical functions, including memory, thinking, orientation, comprehension, calculation, learning capacity, language and judgement.” 2). Dementia is classified into 4 types: Alzheimer’s disease (AD), vascular dementia (VD), dementia with Lewy bodies (DLB), and dementia due to other diseases.

A survey conducted in Ama Town, Shimane Prefecture found that dementia was observed in 104 out of 943 people aged 65 and older. Among all the types of causes, dementia directly caused by AD accounted for more than 60% of the cases with AD 63.5%, VD 15.4%, DLB 4.8%, Parkinson’s disease dementia (PDD) 6.7%, progressive supranuclear palsy (PSP) 1.9% and frontotemporal lobar degeneration (FTLD) 0.96% 3).

As a neuropathological feature of AD, atrophy is observed in the hippocampus and cerebral cortex in the brain, and neuronal loss and the deposition of senile plaques and neurofibrillary tangle (NFT) are widely observed microscopically (Fig. 1) 5). NFT, which is found under an electron microscope, is a unique fiber bundle called paired helical filament (PHF). Amyloid-β protein (Aβ) and hyperphosphorylated tau protein have been identified as primary structural components of senile plaques and PHF. Tau protein is a microtubule-associated protein with a molecular weight of about 50,000 that exists in the nerve axons, and has the functions of promoting and stabilizing the polymerization of microtubules. Microtubules form a cytoskeleton and function as a transport rail for intracellular proteins and intracellular organelles. When tau protein is phosphorylated, microtubules are destabilized, causing the suppression of the intracellular transport mechanism. 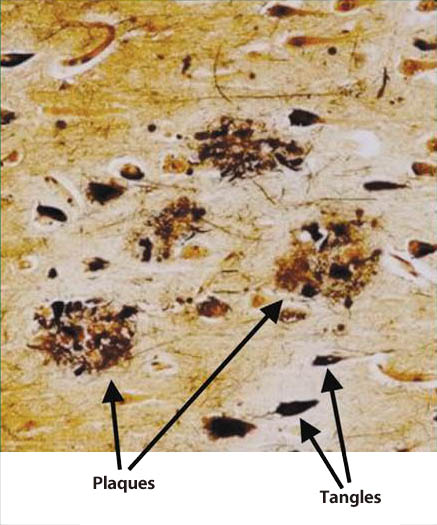 Also, senile plaques, which are depositions of Aβ, have higher disease specificity to AD than NFT. Diffuse plaques, which are primarily non-fibrillar Aβ depositions, are lesions at the earliest stage of the AD brain.In the familial AD of the autosomal dominant inheritance forms, point mutations and duplications of amyloid precursor protein (APP) have been identified as being associated with the disease. Among Aβ, polymerized amyloid-β aggregates, in particular, have neurotoxicity. These characteristics suggest that deposition of Aβ in the brain precedes tau protein in the onset of AD and is closely related to the pathogenesis of AD. The theory of pathogenetic mechanism of AD which focuses on Aβ is called the “amyloid cascade hypothesis” 6).

Also, AD patients have reduced choline acetyltransferase (ChAT) activity in the cerebral cortex compared to the normal control group. The cerebral cortical ChAT activity in patients with AD correlates with with global cognitive score. In AD, a significant loss of cholinergic neurons are observed in the nucleus basalis of meynert (NBM) of the basal forebrain, and there is a disorder in the cholinergic pathways that project from the central nervous system cells present in the basal forebrain to the cerebral cortex and hippocampus. AChE inhibitors and nicotine boost acetylcholine neurotransmission in the brain. On the other hand, it has been demonstrated that blocking acetylcholine neurotransmission in the brain by administration of atropine and scopolamine affects learning and memory behavior. These facts suggest that cholinergic (acetylcholine) nerve dysfunction is closely associated with cognitive functions including learning and memory. The theory on the pathogenesis of AD that is due to the failure in production of acetylcholine is called the “cholinergic hypothesis” 7).

In addition, based on the observation that senile plaque deposition in AD patients is not correlated with neuronal loss, there is another theory that considers that tau protein is the main causative agent of dementia. The disappearance of tau protein, a microtubule-stabilizing factor, and the formation of paired helical filament (PHF) in the axons of neurons generates NFT, leading to denaturation of the cytoskeleton, which is presumed to be the pathogenosis of dementia.This theory on the onset mechanism of AD is called the “tau hypothesis” 8-9). However, there is some debate as to whether the hyperphosphorylation of tau protein occurs first or the formation of PHF occurs first.

Glycation is mainly related to the amyloid cascade hypothesis and the tau hypothesis from the viewpoint of protein denaturation, enhanced crosslinking and RAGE-mediated induction of inflammation.

Typical complications of diabetes include neuropathy, retinopathy, nephropathy, and cardiovascular disease. Furthermore, the incidence rate of dementia is known to be high in diabetic patients (Fig. 2) 10).A large-scale epidemiological study conducted by the University of Rotterdam (Rotterdam study) for approximately 2 years from 1990 examined the relationship between diabetes and dementia among 6370 patients (692 patients with type 2 diabetes (2DM) and 5678 non-diabetic patients) with an average age of 55 years and older 11). It found that 126 people (2.0%) developed dementia, out of which 27.0% had 2DM. Among the 126 people who developed dementia, 89 (70.6%) had AD, and of the 6244 people who did not develop dementia, 10.5% had 2DM. Based on this result, the risk for 2DM patients was estimated to be 1.9 times higher in AD than non-diabetic patients. 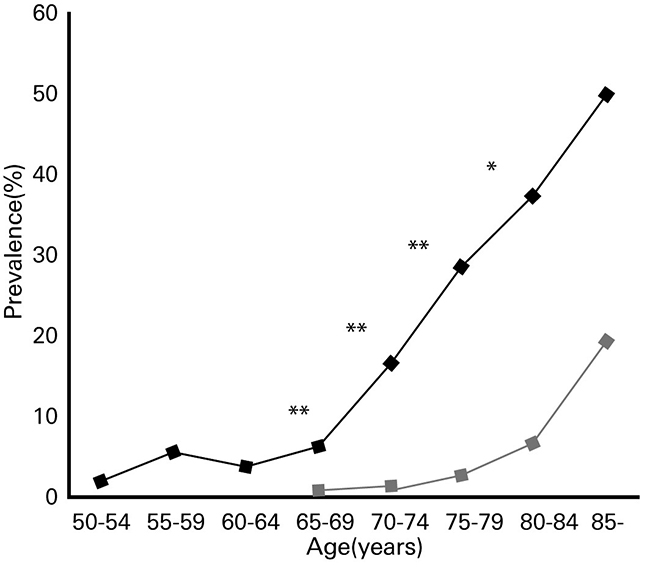 An AD patient’s brain is neuropathologically characterized by brain atrophy, senile plaques, and neurofibrillary tangles. Senile plaques are composed of amyloid-β protein (Aβ), which is a peptide (Aβ40, Aβ42) composed of around 40 amino acids that have a molecular weight of 4,300 to 4,500.Aβ is derived from the amyloid-β protein precursor (APP) by the actions of β- and γ-secretase. In AD brains, Aβ forms aggregates into insoluble fibers and deposits as amyloid.When incubated in the presence of glucose, Aβ is glycated and converts into AGE (AGE-Aβ). The amino acid sequence of Aβ includes lysine residues (Lys: K) at positions 16 and 28 and arginine residues (Arg: R) at position 5 and these amino acid sequence sites may be involved in glycation. In addition, Aβ aggregates when incubated in the presence of glucose.When AGE-Aβ was added to an Aβ-glucose solution, aggregation was accelerated compared to a case where AGE-Aβ was not added 13). The above suggests that AGE-Aβ acts as a “seed” that promotes the aggregation of Aβ. In addition, the amount of AGEs in the tissue protein fraction containing senile plaques in the frontal lobe was three times higher in AD patients than in healthy elderly subjects 14). On the other hand, adding aminoguanidine, a glycation reaction inhibitor, to the Aβ-glucose reaction system and incubating it led to the formation of Aβ aggregates being suppressed 15). Also, the presence of pentosidine, pyrraline, and CML has been observed in senile plaques 14-15). The above suggests that the conversion of AGEs from Aβ via glycation may be related, as one of the factors that promotes the formation of protein crosslinks and the aggregation of Aβ.

Furthermore, pentosidine, CML, and RAGE, which is a receptor for AGEs are found in microglia and astrocytes in the brain of AD patients 19), which have increased significantly compared to healthy elderly people. Microglia, also referred to as resident macrophage, are a type of cell that exist in the central nervous system, and have functions such as removing/repairing neurons 20). On the other hand, activation of microglia has indicated production of proinflammatory cytokines such as tumor necrosis factor (TNFα), interleukin (IL)-1β, and interferon (IFN), suggesting that it may cause damage to neurons 21). Astrocytes are star-shaped glial cells that are specifically present in the brain and spinal cord. They maintain the functions of the central nervous system such as regulation of blood flow, supply of energy to neurons, involvement in synaptic functions and regulation of neurotransmitters 22). When chicken egg albumin-AGE was added to cultured microglial cells, production of nitric oxide, IL-6, TNF-α, etc. via RAGE was observed, causing inflammation 23). Also, in experiments where various AGEs were added to the culture systems of the cortical neuronal cells of rats, a stronger induction of apotosis was observed in glyceraldehyde-derived AGEs compared to amadori products, glycolaldehyde-derived AGEs, methylglyoxal-derived AGEs and glyoxal-derived AGEs 24).On the other hand, CML and CEL did not induce cell death. Based on these results, it is presumed that the formation and accumulation of AGEs associated with the accumulation of Aβ and senile plaques in the brain induces Aβ neurotoxicity, RAGE-mediated inflammation and apotosis, and is involved in the promotion and increase of neuronal cell death, which is a pathological condition of AD. (Fig. 3) 25).

These findings suggest that the use of substances that reduce the formation and accumulation of AGEs due to glycation may serve as measures to prevent the onset of AD 26-27). 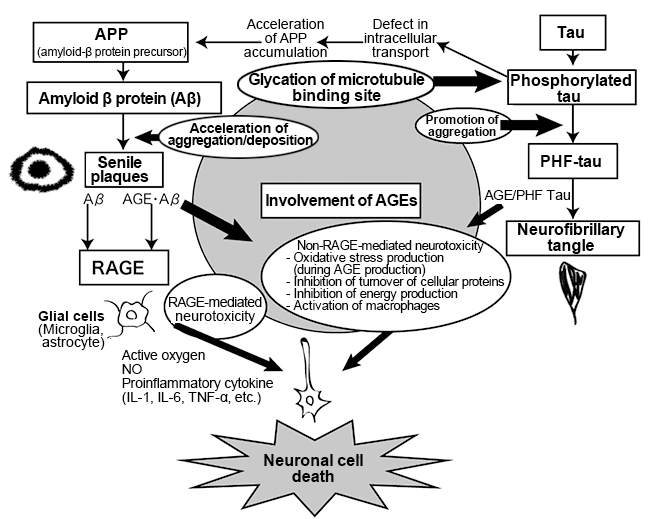