Glycative stress increases due to high blood glucose as well as the production and accumulation of carbonyl compounds. A series of these reactions is accelerated by ultraviolet rays and/or oxidation. Anti-glycation needs to be recognized in a broader sense as a measure to be taken against glycative stress instead of in a narrow sense where it’s seen as just a glycation reaction. When it comes to glycative stress evaluations, various substances that are generated in the process of non-enzymatic reactions of glucose and proteins in the body, can be a biomarker.

Here we would like to explain about the measurement methods for blood glucose, HbA1c, glycoalbumin and glycation reaction intermediate.

Blood glucose is one of the biomarkers for glycative stress in terms of the evaluation of postprandial hyperglycemia. As for measuring blood glucose levels, self-monitoring of blood glucose (SMBG) is the easiest method. Regarding blood glucose’s measurement principles, there are the enzyme electrode method and enzyme colorimetric (colorimetry) method 1).

In regard to the enzyme electrode method, one of two methods (glucose oxidase (GOD) method, glucose dehydrogenase (GDH) method) will be selected based on the glucose-degrading enzyme to be used 2). In either way, electrons, which are generated when blood glucose is dissolved via enzymes, are transferred to ferricyanide ion, an electron carrier (mediator), and then converted into ferrocyanide ions (Fig. 1). After that, the electric current volume can be measured as a glucose concentration since the electric current that generates when a certain level of voltage is applied to the electrode responds the blood glucose concentration. 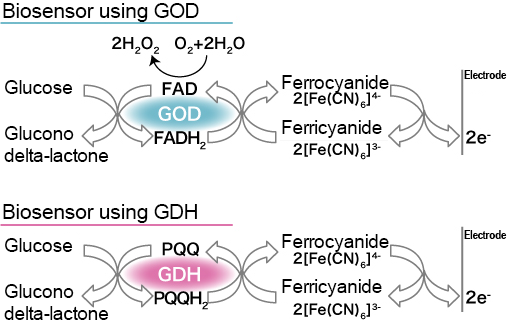 The enzyme colorimetric (colorimetry) method includes the hexokinase (HX) method and glucose oxidase/peroxidase (GOD/POD) method. In the HX method, blood glucose is converted into glucose-6-phosphate (G6P) and then NADH/tetrazolium are produced via glucose-6-phosphate dehydrogenase (G6PDH). Then, diaphorase is used to affect the produced substances and colorimetry is performed for formazan whose colors were developed to be between blue and red. In the GOD/POD method, hydrogen peroxide that is generated depending on the amount of blood glucose via the GOD effects reacts with chromogen via the POD (peroxidase) effects and produces quinone dyes. Then, perform colorimetry for the produced quinone dyes.

SMBG makes it possible to perform measurement accurately when the hematocrit value is positioned near the standard range (20 to 60％). However, higher values are indicated if it is lower than 20％ (e.g. patients with anemia, dialysis patients), and lower values are indicated if it is higher than 55％ (e.g. newborns, premenstrual women). In addition, the higher the dissolved oxygen tension in blood is, the lower the blood glucose level is when measured via the GOD method 3).

Many SMBG devices with various features are sold by multiple domestic manufacturers, making it possible to select one according to the user’s desired usage 4). Measurement time depends on each device, but it takes about 5 to 30 seconds. SMBG is classified as specially controlled medical devices (class III) by the Pharmaceutical Affairs Law. Therefore, advertisement is limited.

Glycation reactions can be divided into early stage reaction, intermediate production and late stage reaction. Amadori compounds that are produced during early stage reaction include glycated proteins such as HbA1c and glycoalbumin (GA). They are used as a biomarker to reflect the previous glucose status in the diabetes evaluation, and are effective as glycative stress biomarkers, just like blood glucose levels 5).

HbA1c is a substance that valine (an amino acid of hemoglobin A’s beta chain (N-terminal)) becomes a schiff base and then becomes a ketoamine compound (glycated protein) via glycation reaction with glucose. Since glycation reaction depends on the blood glucose concentration, HbA1c increases according to high blood glucose levels. (concentration, time, etc.) The generated HbA1c continues to exist for 120 days, which is the lifespan of red blood cells. As a result, the ratio (%) of HbA1c contained in the total hemoglobin (hemoglobin A) in blood reflects the blood glucose status of previous 1 to 2 months.

To measure HbA1c, you can use the HPLC method, immunity method and enzyme method 6). In the HPLC method, hemoglobin separation analysis is performed via the ion-exchange chromatography, and then an HbA1c value is calculated from HbA1c and the peak area of total hemoglobin. Besides HbA1c, it is possible to measure HbF (fetal hemoglobin), abnormal hemoglobin, etc. via the HPLC method, which is one of advantages of this method. The immunity method makes it possible to select and measure only HbA1c using an antibody made from an HbA1c antigen. Since a highly specific antibody is used, it is likely that there are less effects from hemoglobin that is not HbA1c. In the enzyme method, hemoglobin beta chain (N-terminal) glycated dipeptide is separated and released by a proteolytic enzyme and then measured via the colorimetric system using fructosyl peptide oxidase. The enzyme method is suited for processing large amounts of samples using an automatic analyzer. However, the immunity method and enzyme method require that the total hemoglobin amount be measured separately to calculate the HbA1c value. Also, HbA1c measurement values were internationally standardized and NGSP (National Glycohemoglobin Standardization Program (international standards)) values were introduced 7). Accordingly, it is necessary to correct (raise) JDS (Japan Diabetes Society) values, which have been used for medical care in Japan on a daily basis, by approximately 0.4％ when comparing them with NGSP values.

GA is a serum albumin’s glycated protein. Since the albumin’s half-life is about 20 days, the average blood glucose level of the last 2 weeks to 1 month can be reflected. So, GA is also applicable to diabetics and drug therapy recipients (insulin administration, etc.) who have a wide range of fluctuation in their blood glucose levels. Also, it was found that there were 4 glycation parts in an albumin molecule (Lys-199, 281, 439 and 525)8) and one of its characteristics is that it responds and transitions relatively rapidly and largely to the fluctuation of blood glucose levels compared to HbA1c.

The HPLC method and enzyme method have been used for GA measurements. Currently, however, the enzyme method is the main measurement method for clinical tests. In the enzymatic method, after blood albumin has been dissolved by a proteolytic enzyme to separate and release glycated lysine, measurement is performed via the colorimetric system using ketoamine oxidase. On the other hand, blood albumin is specifically measured via the bromocresol purple (BCP) method to calculate the ratio (%) of GA contained in blood albumin.

HbA1c and glycoalbumin are also one of the measurement items in the blood tests at the time of lifestyle disease screening or blood donation. Measurement is possible at contracted clinical test organizations and such.

3DG is an α-dicarbonyl compounds produced from amadori compounds, which is 10,000 times more reactive than glucose and is involved in the formation of AGEs. If the concentration of 3DG in plasma rises by 100 nmol/L, the risks of diabetic retinopathy and nephropathy are approximately doubled. (Fig. 3)10) 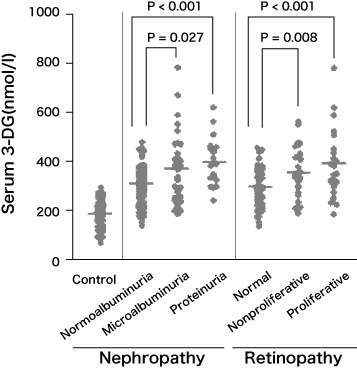 Fig. 3 3DG concentration in the blood of diabetics and progress of nephropathy and retinopathy 10)
Benferroni/Dunn multiple comparison test

GO is produced via automatic glucose oxidation and lipid peroxidation. MG is also produced intracellularly from glycolysis and polyol pathways as well. The glycation reaction pathway differs depending on compounds in the glycation reaction intermediate and the types of AGEs that are ultimately produced differ. In particular, AGEs whose intermediate is glyceraldehyde are called toxic-AGEs (TAGE) and are deeply involved in the progression of diabetes complications 11).