In the fields of cosmetics, beauty care, health foods, and anti-aging, materials, products and lifestyle choices with the keyword being anti-glycative have drawn much attention since around the fall of 2009. This article discusses evaluation methods for anti-glycative effects from the view of anti-aging medicine while showing some cases as examples.

In vitro evaluation methods for anti-glycative effects of natural products

To evaluate the anti-glycative effects of natural products, add model proteins such as human serum albumin (HSA), reducing sugars (such as glucose or fructose) and the materials to be evaluated (test substance) into the phosphate buffer solution (pH 7.4) at a temperature of 60°C for 40 hours to cause a reaction. Then, compare the amount of AGEs in the reaction solutions between the ones with and without test substances, and calculate the inhibitory rate of AGEs formation (%). The level of AGEs formed by incubating HSA and glucose at a temperature of 60°C for 40 hours is equivalent to that which is formed at a temperature of 37°C for approximately 60 days (Fig 1) 1). 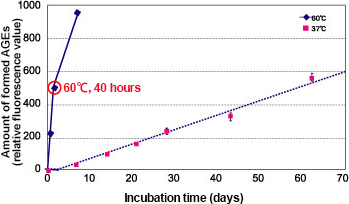 The easiest way to evaluate anti-glycative effects is to measure fluorescence radiated by AGEs (excitation wavelength at 370 nm, emission wavelength at 440 nm). Fluorescent AGEs include pentosidine (excitation wavelength (ex) at 335 nm, emission wavelength (em) at 385 nm) 2), crossline (ex 379 nm, em 463 nm) 3), and pyrropyridine (ex 370 nm, em 455 nm) 4). As CML, pentosidine, 3DG, GO and MGO are also formed in the reaction solution, their formed amount can be also measured by each respective method. The anti-glycative effects are calculated as follows: add test substances to make 3 or more different concentrations and let the solution react. Then, calculate 50% inhibitory concentration (IC50) of the test substances based on the measured values of AGEs and glycation reaction intermediate in each reaction solution.

Aminoguanidine, a glycation reaction inhibitor, is commonly used as positive control of inhibitory effects of AGEs. Aminoguanidine is one of the drugs that was developed for the treatment of diabetes complications and it is an AGE inhibitor that blocks carbonyl groups in the molecules of the glycation reaction intermediate 5). However, it is not approved as drug in Japan due to side effects and such.

On the other hand, it is reported that chemical compounds with a catechol skeletal structure such as flavonoids including catechin and epicatechin contained in Camellia sinensis, and gallic acid that is contained abundantly in galls (Chinese galls) of Rhus javanica, inhibit the formation of CML at low concentration levels below 10 μmol/L. However, it is also reported that the accelerated formation of CML takes place at high concentration levels of 1 mmol/L or higher (Fig. 2)16-17). Since the mechanism of how anti-glycative components contained in natural products work has not been fully elucidated yet, caution must be exercised when using these materials. 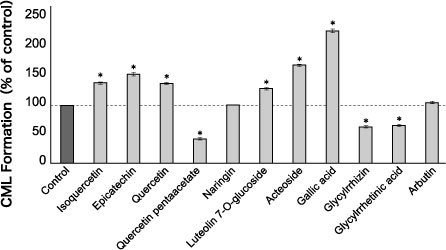 When a material was recognized to have in vitro anti-glycative effects, the effectiveness will be verified by clinical trials in humans. Assuring safety of the materials is essential before conducting clinical trials. Therefore, the food safety of the materials or substances of the test food must be confirmed via various studies including the borderline of pharmaceuticals to non-pharmaceuticals, survey on the history of safe use, acute toxicity study (single-dose toxicity study), subacute toxicity study (repeated dose toxicity study), Ames test, Rec-assay and pesticide residue testing. Furthermore, it is desirable to examine the ingredients’ relationship with the following whenever possible: no observed adverse effect level (NOAEL), no observed effect level (NOEL), acceptable daily intake (ADI) and tolerable daily intake (TDI). The following guidelines will be useful to assess those results: “The guidance for safety assessment of health food” 18), “The safety guideline for voluntary inspections on the ingredients used for capsuled or pellet food” 19), “Guidance for establishing safety in first-in-human studies during drug development” 20), Guideline on drug interaction for drug development and appropriate provision of information (draft)” 21).

Human clinical trials are conducted after verifying the safety of the test food, followed by preparation of a protocol for human clinical trials, recruitment of subjects after the Human Research Ethics Committee has approved the clinical trial, and receiving informed consent from the subjects. The results of the clinical trial depend not only on the level of the anti-glycative effects of the test food, but also on the health conditions of the subjects. Subjects with only a small amount of AGEs accumulated and low glycative stress before the test will show a small change after the intake of anti-glycative materials and substances. In the case of tests on healthy subjects, the anti-glycative effects can be easily observed in subjects who do not have diseases such as glucose metabolism disorder, have high levels of postprandial blood glucose, and have a large amount of AGEs accumulated in their skin, that is, those who have high levels of glycative stress.

We found that the in vitro anti-glycative effects (inhibitory effects on fluorescent AGEs) against HSA in the extracts from Houttuynia cordata, Crataegus laevigata, Chamaemelum nobile and Vitis vinifera, which are herbs with an ample history of food safety and are classified into different groups in terms of plant taxonomy. Then, we commercialized them as an anti-glycative food material product called “AG Herb MIX” 22). Now, we will discuss examples of safety/functionality assessments of anti-glycative materials by taking the development of these materials as an example.

Then, the food safety of the mixed herbal extracts, which were commercialized as AG Herb MIX was confirmed via various studies including the survey on history of safe use, acute toxicity study, Rec-assay and pesticide residue testing. At the same time, a 2-week consecutive intake test was conducted on healthy subjects by administering 3,000 mg/day of AG Herb MIX (5 time as much as the standard intake amount) after obtaining approval from the Human Research Ethics Committee and obtaining informed consent from the subjects. As a result, it was confirmed that intake of AG Herb MIX is not likely to adversely affect various functions including liver functions, renal functions, glucose/lipid metabolism functions and human drug metabolism functions.

Moreover, a double-blind parallel group comparative study was conducted using the same procedure for pre-diabetic subjects (casual blood glucose levels of 110 to 199 mg/dL and HbA1c (JDS value) of 5.5 to 6.5%) when administering a 3,000 mg/day dosage of AG Herb MIX or the same amount of placebo food 24). As a result, the subgroup analyses exhibited the following: the subjects with a blood glucose level of 110 mg/dL or more indicated a tendency to inhibit the increase of 3DG in blood (p = 0.094) compared to the placebo food intake group after 8 weeks had passed since the start of the intake, and the subjects with a HbA1c of 5.9% or more showed a significant decrease in CML (p = 0.048) (Fig. 3).

Fig. 3 Changes in the amount of glycative reaction products in blood before and after intake of mixed herbal extracts
Results of the subgroup analysis of subjects with a blood glucose level of 110 mg/dL and in the pre-diabetic group (casual blood glucose level of 110 to 199 mg/dL and HbA1c (JDS value) of 5.5 to 6.5%).
Control: placebo food intake group (N=8), Test: test food intake group (N=11), Paired t-test 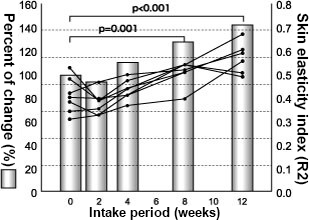 Then, a double-blind parallel-group study was conducted in postmenopausal women with high glycation stress levels (i.e. high blood glucose levels after 60 minutes had passed since eating rice and high skin AGEs accumulation levels) using the same procedures. The subjects intook a vinegar drink (test food) that contained 5 g/day of indigestible dextrin and 100 mg/day of AG Herb MIX for 8 consecutive weeks 26). As a result, the analysis found that the amount of CML in skin stratum corneum (percent of change) measured by the tape stripping method decreased significantly among the subgroup of subjects with a blood glucose level of 150 mg/dL or higher after 60 minutes had passed since eating 200 g of rice. This was found 8 weeks after the start of the intake of the test food. (P = 0.025) (Fig. 5).

Fig. 5 Changes in the amount of CML in the stratum corneum after intake of a vinegar drink containing mixed herbal extracts
Subclass analysis results with a blood glucose level of 150 mg/dL or more 60 minutes after the ingestion of 200 g of cooked rice with paired t-test

As shown above, clinical evaluations should be conducted after the following procedures have been completed: verifying the safety of the material whose anti-glycative effects have been confirmed, selecting a glycation stress biomarker to be measured based on the results of in vitro tests and expected effects, preparing a test protocol and obtaining the approval of the Human Testing Ethics Committee.

How to exhibit anti-glycative effects data

The in vitro anti-glycative effects are often indicated as IC50 of the test substance and are evaluated in comparison with the effects of aminoguanidine, which is the positive control. However, the IC50 varies depending on the types and concentrations of proteins and sugars used in the in vitro anti-glycative evaluation system, reaction temperature and time, and the type of AGEs to be measured. For this reason, it is necessary to align the measurement conditions in order to compare it with the data listed in other documents. In many cases, the effective ingredients contained in natural products are not identified, therefore, the IC50 is calculated based on the solid contents (evaporation residue) and total polyphenol amount in the extraction liquid. Furthermore, there are multiple glycation pathways and various types of AGEs produced 6). Therefore, the evaluation data of anti-glycative effects need to be individually verified as to which AGEs production pathway the material or substance may affect.

Finally, the efficacy of the anti-glycative effect is confirmed in human clinical trials. In this case, the glycation stress biomarkers to be evaluated are selected based on the action point obtained in the evaluation of the in vitro anti-glycative effects of the materials or substances used for intake. The amount of intake is determined based on various data such as the results of large-scale clinical trials of aminoguanidine conducted in the United States and the clinical evaluation data of anti-glycative materials that are already commercialized. Aminoguanidine has demonstrated to improve diabetic nephropathy when it is consecutively taken at a dosage of 150 mg or 300 mg per day for 6 to 36 months 5). Clinical studies not only examine the inhibitory action of production and accumulation of AGEs in blood and skin, but also monitor changes in skin indexes such as skin firmness, elasticity, dullness, and texture to show efficacy in the anti-aging aspect of the anti-glycative effect.