AGEs produced and stored in blood and in tissues due to an increase in glycative stress promote the reduction and blockage of physiological functions. In recent years, the pathways in which AGEs transmit intracellular signals through receptors, and certain receptors that trap and remove AGEs have been revealed. (Figure 1)1) 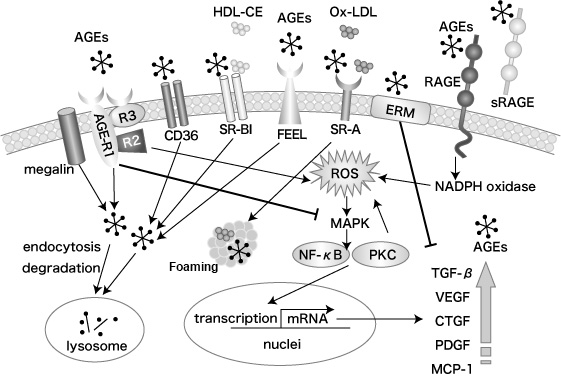 AGE receptors can be roughly sorted into 1) those related to inflammation and 2) those involved in the degradation and removal of AGEs. Those sorted in 1) include receptor for AGEs (RAGE) and AGE-R2. Those sorted in 2) include AGE-R1, AGE-R3, CD36, SR-A, SR-BI, FEEL-1,2, ERM and megalin. These receptors are expressed in blood vessels, kidneys, nerves, macrophages and hematopoietic stem cells (Table 1)1). We have compiled some common AGE receptors and their functions. Please refer to the table below.

RAGE, a member of the immunoglobulin superfamily with a molecular weight of 45 kDa, is a type of bitopic membrane protein. It is expressed in monocytes, macrophages, nerves, tubular cells, mesangial cells, etc. RAGE binds amyloid betapeptide, S100/calgranulins, high mobility group box 1 (HMGB-1) as well as AGEs, and it is responsible for promoting inflammation and oxidative stress. 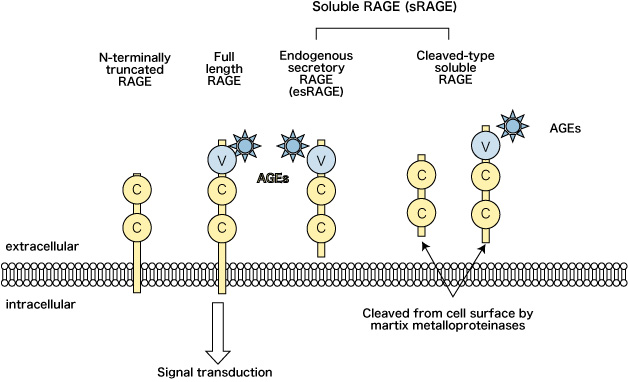 Of these, the one lacking the intracellular domain is called a soluble RAGE (sRAGE). Furthermore, several forms of sRAGE exist; endogenous secretory RAGE (esRAGE) that are produced inside the cell and secreted outside the cell, and cleaved-type soluble RAGE (CL-RAGE) which is made of F-RAGE that has been cleaved and released into the blood by proteases and matrix metalloproteinases (MMP), namely, disintegrins and metalloproteinase10 (ADAM 10)4).

When F-RAGE binds AGEs on the cell membrane, NADPH oxidase is activated and intracellular oxidative stress is promoted, which activates NF-kB and leads to the secretion of various cytokines and growth factors, and the promotion of expression of cell adhesion molecules.5) The promoted oxidative stress deactivates nitric oxide (NO) and aggravates inflammatory reactions and thrombotic tendencies, and is believed to be involved in the progression of arteriosclerosis.

Furthermore, F-RAGE that are bound to AGEs inhibits the production of vascular endothelial cells (PG12, or,  prostacyclin) and promotes the synthesis of plasminogen activator inhibitor (PAI-1), which is involved in the stabilization of blood clots through the prevention of fibrinolytic activity.7) It is generally understood that AGEs promote the coagulation of platelets and the cascade of the coagulation system.

On the other hand, sRAGE has a section that binds AGEs. sRAGE captures AGEs that are outside the cell and is believed to act as a decoy receptor that inhibits AGEs from binding themselves to RAGEs on the cell surface.8) As type-2 diabetes patients show significantly lower levels of esRAGE in teir blood when compared to non-diabetic people, there is a possibility that it is involved in the development of type-2 diabetes.9-10) In addition, some reports indicate that type-1 diabetes patients with low esRAGE levels in their blood have a high risk of retinopathy (Figure 3).11) Furthermore, there have been indications that the esRAGE levels of type-2 diabetese patients were negatively correlated with the severity of carotid artery arteriosclerosis and coronary artery diseases.12-13) 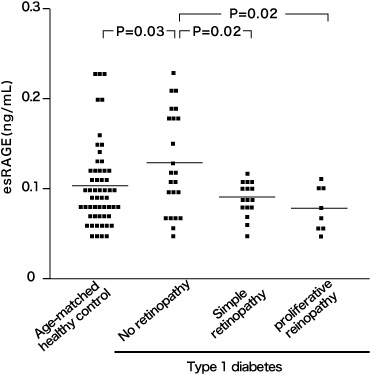 Figure 3 Relationship between the esRAGE
in the blood serum of type-1 diabetes patients and retinopathy
The horizontal lines indicate the average value of the group;
Scheffe’s F-test.
Sakurai S, et al. (2006)11)

AGE-R1, a member of the lectin family and also called OST-48 (oligosaccharyltransferase-48), is a bitopic membrane protein with a molecular weight of 48 kDa. It is expressed in endothelial cells, mesangial cells, macrophages, etc., and removes AGEs through endocytosis. There is a possibility that AGE-R1 is related to longevity.14)

AGE-R2, also called 80K-H (80kDa protein kinase C substrate), is a tyrosine phosphorylated protein with a molecular weight of 80 kDa and exists in cellular cytoplasm. It is expressed in mononuclear cells, kidneys, vascular endothelium, brain, nerves, etc. and is involved in the activation of intracellular signals.

AGE-R3, also called galectin-3, is a member of the lectin family with a molecular weight of 32 kDa. AGE-R3 directly binds AGEs via the carbohydrate recognition domain and is expressed in macrophages, eosinophils, mast cells, nerves, kidneys, etc. Effects of AGE-R3 include the inhibition of adhesion between cells and laminin (matrix), activation of mast cells, regulation of cell growth and apoptosis, and degradation of AGEs through endocytosis. As AGE-R3 is expressed more if the person is old or has diabetes, there is a possibility that it acts as protection against aging.15)

SR-A, CD6, FEEL-1, FEEL-2, which are also called scavenger receptors, work on the degradation and removal of AGEs.

SR-A (scavenger receptor class A) treats acetylated LDL (low density lipoprotein) and oxidated LDL as ligands and takes up AGEs into the cells from the cell surface of macrophages and forms foam cells. Thus it has been suggested that SR-A is involved in the atherosclerotic process.16) CD36 (cluster of differentiation 36) is expressed on the surface of the macrophages, vascular endothelial cells and adipocytes. CD36 binds themselves with fatty acids, collagen and oxidated LDL, and plays a role in the uptake of oxidated LDLs into macrophages and transport of fatty acids to mast cells. CD36 takes up AGEs into adipocytes and then degrades and removes them. Thus it has been surmised that it acts as protection against arteriosclerosis.17)

SR-BI (scavenger redeptor-BI) is expressed in macrophages, liver, adrenal glands, ovaries, etc. and promotes the uptake of cholesterol ester into the liver.18)FEEL-1 (fasciclin EFG-like laminin-type EGF-like and link domain-containing scavenger receptor-1) and FEEL-2 are expressed in the spleen and lymph nodes, and are involved in taking up AGEs into cells and degrading them.19)

Megalin, a member of the LDL receptor gene family, is a glycoprotein with a molecular weight of approx. 600 kDA. It exists in proximal tubular cells.20) In recent years it has been proven through in-vitro experiments that megalin binds AGEs and it has been reported that AGEs that have passed through glomeruli are trapped by megalin and taken up into lysosome where they are degraded.21)

ERM proteins (ezrin, radixin moesin) connect the cell membranes and intracellular actin filaments. They play roles in the cell migration, adhesion and cell morphology. There have been reports that the N-terminal of ERM family proteins bind themselves with AGEs.22)