What is kidney disease?

What is kidney disease?

Kidneys are a pair of bean-shaped organs located one on each side of the back of the abdomen. The five main functions of the kidneys are as follows (Fig. 1) 1-2): 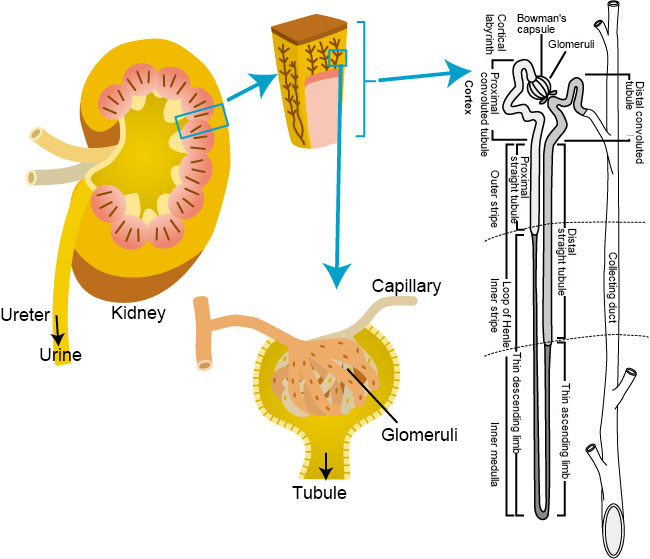 Deterioration in renal function causes various symptoms including swelling due to a buildup of waste products and excess water in the body, electrolyte imbalance, increased blood pressure, anemia and fragile bones. There are various types of renal diseases such as chronic nephritis (chronic glomerulonephritis), diabetic nephropathy, renal sclerosis, polycystic kidney disease and nephrotic syndrome. In 2002, the National Kidney Foundation in the US proposed the concept of chronic kidney disease (CKD) which encompasses from the presymptomatic stage of chronic renal failure to the terminal stage, which has been recognized as diagnostic criteria that indicate a decline in kidney function 3).

The number of patients undergoing kidney dialysis in Japan was more than 300,000 as of the end of 2012, and continues to grow by 5,000 to 6,000 each year 4). Therefore, it is no exaggeration to say that renal disease is a national disease. On the other hand, the primary causative diseases leading to the use of kidney dialysis are diabetic nephropathy (44.1%) followed by chronic glomerulonephritis (19.4%) and renal sclerosis (12.3%). Since diabetic nephropathy has continued to increase even after it overtook chronic glomerulonephritis (currently second most common) in 1998, attention has been paid to glycative stress as a factor for the progression of renal disease.

Excretion of AGEs by the kidneys

Kidneys play an important role in excreting AGEs and inhibiting them from building up. The proximal tubule of the kidney has a membrane receptor called megalin, which reabsorbs low-molecular-weight proteins that are filtered from urine. Low-molecular-weight AGEs, which are generated in the body and circulate in the blood, bind to megalin in the kidneys, then are absorbed into the tubular cells by endocytosis. However, when a large amount of AGEs are absorbed into the megalin, the decomposition of AGEs in lysosomes is saturated. As a result, AGEs build up in the tubular cells 6-7).

Kidneys are also involved in metabolic excretion of AGEs absorbed from a person’s diet. It was reported that when pentosidine was intravenously administered to rats, 35% of it accumulated in the kidney 6). Another study reported that concentrations of urinary AGEs decreased in healthy subjects who consumed a low AGEs diet 7-8).

Histological features of diabetic nephropathy include the thickening of the glomerular basement membrane and an increase in the mesangial matrix. In addition, the buildups of AGEs are observed in various cells and sites such as glomerular basement membrane, mesangium, podocytes, tubular cells, and endothelial cells (Fig. 2) 9-10). Eventually, it results in renal failure accompanied with glomerulosclerosis. 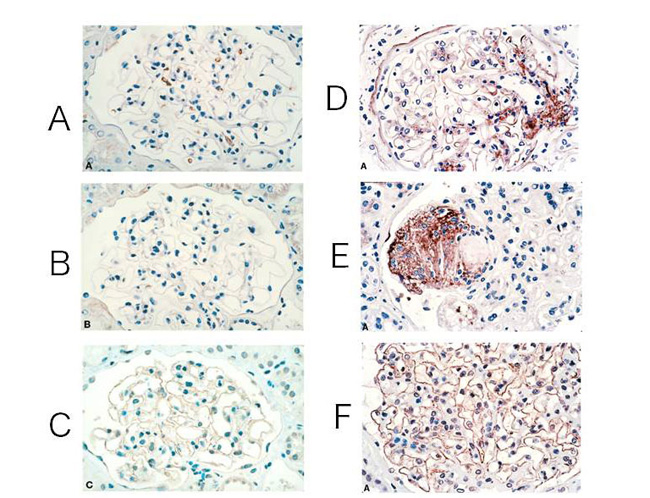 The cause of diabetic nephropathy is continuous hyperglycemia. Complicated factors are involved in the progression process from its onset to renal failure. The most significant changes that occur in glomerulus in the early stage of the onset of diabetes are glomerular hyperfiltration and glomerular hypertension. Glomerular hyperfiltration and elevated intraglomerular pressure damage endothelial cells, leading to macrophage infiltration and platelet aggregation. Cytokines and other substances that are released from these cells increase the production of extracellular matrixes from mesangial cells and advance glomerulosclerosis. Furthermore, the extensive stimulation on mesangial cells also increases the production of extracellular matrix. In addition, increased activity of protein kinase C (PKC) due to an increase in intracellular diacylglycerol caused by hyperglycemia and accumulation of AGEs formed by glycative stress and oxidative stress become important factors that progress nephropathy11).

Furthermore, the atrophy of proximal tubular cells and fibrosis of the tubulointerstitium also progress. Metabolic abnormalities, blood flow changes, and expressions of cytokine and the TGF-β (transforming growth factor-β) are also involved in these histological changes.

Application of glycative stress countermeasures to the treatment of diabetic nephropathy

The effects that inhibit urinary proteins and renal histological changes are recognized in AGEs formation inhibitors such as aminoguanidine and OPB-9195 ((+/-)-2- isopropylidenehydrazono-4-oxo-thiazolidin-5-ylacetanilide), a thiazoline derivative 12-14). However, due to their strong side effects, clinical applications of these drugs are not expected. Currently, remedial effects on the kidney function of diabetic patients have been verified in thiamine (vitamin B1) 15) and pyridoxamine (vitamin B6 analogous compound)16).

In addition, improvements in the renal function were observed when RAGE was removed in mice (OVE26) whose characteristics are a progressive glomerulosclerosis and deteriorated renal functions17). This suggests that RAGE is involved in the development of diabetic nephropathy and can be a potential therapeutic target. Furthermore, enhancing the activity of glyoxalase 1 (GLO1), which is one of the dicarbonyl compound scavenging enzymes in the body, alleviated oxidative stress and renal aging. Therefore, it is expected that new drugs based on GLO1 will be developed 18).