Infertility indicates the state where a couple who have no specific diseases desire to become pregnant and lead a conjugal life without contraception, but cannot conceive a child1). The period of time where someone is diagnosed as infertile depends on age. As for young married couples, women in many cases have the potential to naturally get pregnant even after a relatively long period of infertility. However, when it comes to older couples, women are less likely to become pregnant naturally regardless of a short period of infertility.

In Japan, it is said that among couples who have intercourse without contraception while attempting to conceive a child, 65% of them can get pregnant within six months, 80% in one year, 90% in two years, and 93% in three years. That is why the 10% of couples who could not get pregnant after two years are categorized as infertile. The occurrence rate of infertility by gender showed that about 40% are caused by male infertility, about 40% by female infertility, 15% by both male and female infertility and the causes of the remaining 5% are unclear3).

Spermatogenic dysfunction, seminal passage obstruction, vice genital disorders and male sexual dysfunction can be listed as a potential cause of male infertility. In most cases, there are problems with sperm (e.g. azoospermia, oligozoospermia, asthenozoospermia, teratozoospermia). There are two causes of female infertility, fallopian tube patency failure and ovulation disorders, which are attributed to cervical issues, endometriosis, uterine fibroids, uterine malformations, etc. Concurrent complications of these symptoms may cause more complicated female infertility symptoms.

Therefore, about 10% of couples are infertile and it is more likely that either the wife or husband are at fault. Since infertility is caused by dysfunction in the sperm/egg, it is believed that the patients need to undergo fertility treatments step by step for a long period of time3).

It is said that about 10% of couples suffer from infertility in major developed countries. Among them, 5% are caused by an anatomical, immunological, genetic and/or endocrinological factors. Infection, environmental factors, social factors and such are thought to be a major cause of these factors4).

Fertility treatments include the calender-based method of having sexual intercourse at the time of expected ovulation, and pharmacotherapy by taking/injecting a hormone drug. If a couple is not able to conceive a child after undergoing these treatments for six months to one year, the next potential treatment is assisted reproductive technology (ART).  ART indicates the fertility treatments that use eggs and sperms, such as in vitro fertilization (IVF), IVF + intracytoplasmic sperm injection (ICSI), gamete intrafallopian transfer (GIFT) and zygote intrafallopian transfer (ZIFT). IVF and IVF + ICSI are the most widely used treatments in the world4). In Japan, the number of fertility treatment cases has been increasing on a yearly basis, reaching 240,000 in 2010 (Fig. 1)5). 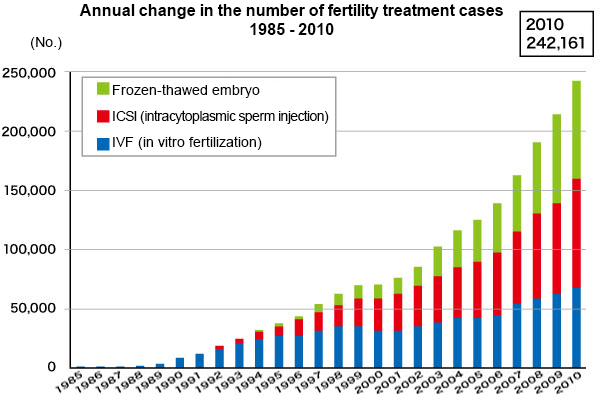 There are three major causes of infertility: ovarian dysfunction, male infertility and egg failure. Ovarian dysfunction is mostly frequently caused by polycystic ovary syndrome (PCOS). PCOS is mainly caused by insulin resistance6) and administering metformin (biguanides for diabetes treatment) improves ovulation and pregnancy rates7). In addition, factors such as anxiety, stress, aging, obesity, being underweight, lack of exercise, lack of sleep, drinking, smoking and an unbalanced diet may cause insulin resistance. Therefore, metformin may also improve embryonic development as well as the pregnancy rate even with ovarian dysfunctions other than PCOS8). Fallopian tube disorders or implantation disorders are also affected by the insulin resistance of the endometrium.

Not a lot of research regarding the relationship between infertility and AGEs have been conducted so far. Compared to healthy women, women with PCOS tend to have ovaries with a higher expression of AGEs and RAGE in ovary cells or vascular endothelial cells9). Women with PCOS, normal fasting blood glucose levels and relatively higher postprandial blood glucose levels also show higher expressions of serum AGEs values and monocyte RAGE compared to healthy women (Table 1)10). On top of that, pentosidine is observed in primordial oocytes, primary ovarian follicles and closed follicles, which indicates that it increases with advancing age11). Adding AGEs to the human chorionic cell culture system induces apoptosis, suggesting that AGEs may damage to implantation and placental functions12).

Table 1. Expression of serum AGEs and RAGE with healthy women and women with PCOS

Infertility causes have something in common with type 2 diabetes. Along with a relative lack of insulin in follicle due to insulin resistance, oxidative stress in eggs and follicles increases or the insulin secretory capacity decreases which leads to postprandial hyperglycemia, followed by an increase in AGEs production in tissues as well as a high expression of RAGE. As a result, vascular endothelial cell disorders, thrombophilia, and proinflammatory are accelerated in the follicles and the microvascular endothelial cells. This phenomenon is thought to facilitate maldevelopment of the ova or follicles, and the follicular atresia. However, since infertility may also occur with insulin dysfunction in only follicles and/or endometrium, it is not necessarily accompanied by systemic symptoms such as high blood glucose or abnormal values in diabetic tests13).

Based on 157 cases of assisted reproductive technology (ART), relationships between AGEs accumulation and ART results have been reported14). The results suggested that the toxic AGE (TAGE) in serum and follicular fluid, pentosidine in follicles and carboxymethyl-lysine (CML) in follicles had a significant negative correlation with the numbers of developing follicles, serum estradiol (E2) values, the number of collected eggs, the number of fertilized eggs, the numbers of embryos and good embryos. However, no correlation was observed between plasma pentosidine, plasma CML and the amount of accumulated AGEs in the skin. Furthermore, pentosidine in follicular fluid was significantly higher in cases of non-pregnancy and miscarriage compared to the cases of continued pregnancy (Fig. 2). 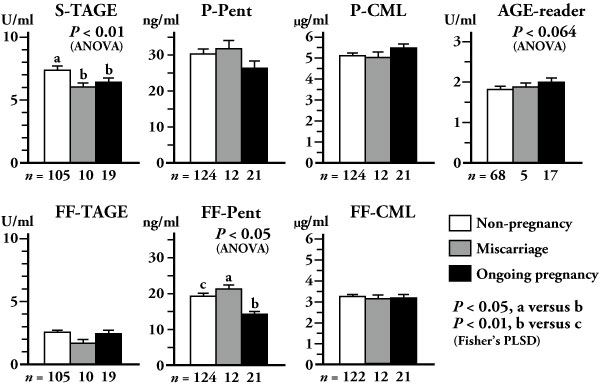 Fig. 2. Amount of accumulated AGEs and ART results in 157 cases of ART (IVF/ICSI)

According to correlation analysis pertaining to 12 factors including subjects’ age, BMI, day-3-FSH (day 3 levels of follicle stimulating hormone), the number of past ART failures, presence/non-presence of fallopian tubes and ovarian dysfunction, TAGE in blood and follicular fluid, pentosidine and CML, 3 factors including age, TAGE in serum and pentosidine in follicular fluid are the significant prognostic factors for continued pregnancy.

For these reasons, it is assumed that an increase in TAGE affects the decrease in the number of follicles, so taking countermeasures before TAGE begins to increase may be able to prevent follicles from being destroyed and thus decreasing in amount.

The improvement effects of assisted reproductive technology (ART) results are being examined through administration of benfotiamine (vitamin B1 derivative that acts as an AGEs inhibitor), metformin (insulin sensitizer) and sitagliptin (DPP-4 inhibitor: an incretin degrading enzyme).

In 7 cases where continued pregnancy did not happen after undergoing ART 3 or more times, benfotiamine was administered (75 mg/day) for 2 months and then ART was conducted again. Then, follicular fluid CML and TAGE significantly decreased and the good embryo rate per egg increased13).

In the 33 cases where metformin was deemed effective for patients who had experienced repeatedly unsuccessful ART(age: 37.5 +/- 0.8) and were without PCOS, metformin was administered (125 mg/day) from the third day of the menstrual cycle and its amount was increased in 125 mg increments every 5 days until 500 to 750 mg/day was regularly administered. Then, ART was conducted 8 to 12 weeks later. As a result, compared to the group with which metformin was not administered, follicle diameter, serum E2 values, E2 value per follicle, the number of good embryos and the rate of continued pregnancy increased significantly (Fig. 3)7).

For 44 cases with women over the age of 41.0 +/- 0.5 who have undergone repeatedly unsuccessful ART after undergoing many kinds of ovarian stimulation methods, sitagliptin was administered for 1 month (50 mg/day), and then ART was performed. Then, the numbers of developing follicles, collected eggs, embryos and good embryos as well as the rate of continued pregnancy increased, compared to the ART cases where sitagliptin is not used13).

As indicated above, inhibiting glycative stress may be effective for follicle development, embryonic development and continued pregnancy as a part of ART15). Also, improving AGEs accumulation may be a new potential fertility treatment.